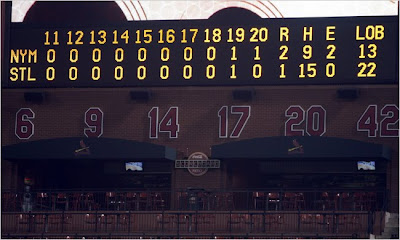 The Mets won in the 20th inning against the Cards! From the New York Times:

"It took 46 players 6 hours 53 minutes to complete it, with 158 plate appearances and enough substitutions and bizarre plays to baffle even the most attentive scorekeeper. At one point in the top of the 18th inning, there was a position player (Felipe Lopez) pitching to a relief pitcher (Raul Valdes) who was making the first at-bat of his career, while a starting pitcher (Kyle Lohse) was asked to go in and patrol left field."
Posted by Elena at 5:30 AM