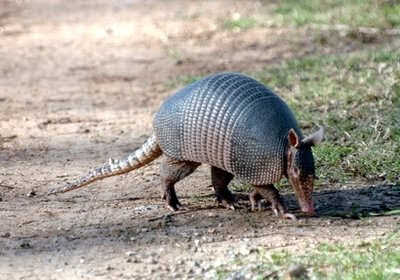 I used to read the NYTimes on line "cover to cover" daily. Like a good NY liberal I also listened to NPR and read El Diario. But now that the Times requires a subscription, I look elsewhere. Like Yahoo. Here's a sample (the pic and all the info swiped directly from Yahoo) of the "news" they offer from one article linking human leprosy to armadillos...

"DNA tests show a match in the leprosy strain between some patients and these prehistoric-looking critters — a connection scientists had suspected but until now couldn't pin down."

"The risk of getting leprosy from an armadillo is low"

"DNA samples were taken from 33 wild armadillos in Arkansas, Alabama, Louisiana, Mississippi and Texas, where they're sometimes referred to as "hillbilly speed bumps" because they're often run over by cars."

"Of the 15 patients for whom researchers had information, seven said they had no contact with armadillos; eight said they did, including one who routinely hunted and ate them."

"I would not cuddle armadillos," said Dr. Warwick Britton of the University of Sydney in Australia, who had no connection with the study.