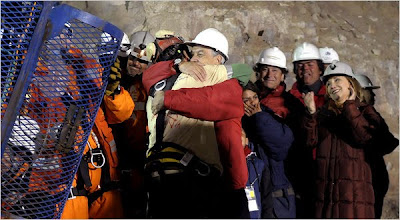 Thanks for the pic, NYTimes, it's the least you could do!

The Chilean miners trapped underground for two months are starting to reach the surface!

From the Times:
"While lauded for its economic management and austerity, the nation has often found the world’s attention trained more on its human rights violations and natural disasters than on uplifting moments.

But the perseverance of the miners, trapped so far underground in a lightless, dank space, has transfixed the globe with a universal story of human struggle and the enormously complex operation to rescue them."

Here, to me, is one of the most important lessons of this experience: "Mr. Piñera [Chile's President] was not satisfied with one option, so he set in motion three efforts to drill a successful rescue hole: Plans A, B and C."

Imagine that - a back-up plan! And a back-up plan to your back-up plan! Right there is the difference between being smart, and being educated (and is Piñera ever educated - Fulbright Scholar to Harvard. We can talk more about him later...) I very much admire the difference between having such a large ego that you actually think that your wish to get something done will make it happen, and the clear-minded practical plan born of steely determination.

By the way, here is the Amnesty International page for Chile.

And here is Isabel Allende's website, just because I she is my favorite author.

Arriba Chile!
Posted by Elena at 5:44 AM