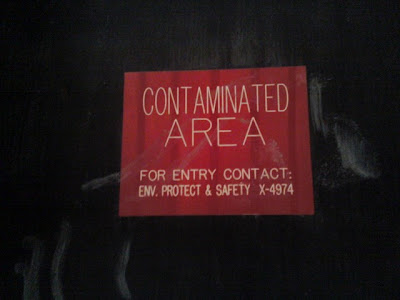 A few weeks ago Osito and I rode our bikes over the Brooklyn Bridge and then took the ferry to Governor's Island. This sign was attached to a door of a building where the civil war re-enactors were playing "let's imprison the Confederates", which, though not a bad game per se, was really lame.


Of course since we were downtown, we had to go eat arepas at Caracas. What? You've never been there? It can only be due to one of two reasons: you keep kosher, or you simply don't want the best food ever to have been made by mortal hands. (Or maybe they aren't mortal - what do I know? Or maybe they don't make them with their hands - that's a possibility, too.) OK, or maybe you have a bunch of kids and live far away. Or maybe you are gluten-free and lactose intolerant. Or maybe you hate Venezuelans because of Hugo Chavez (but remember - he did publically call Resident Bush "the devil.") Whatevs, you should go because these are spectacular Venezuelan arepas and not like the crappy Colombian ones that you inevitably get in NY.